Two papers on plasma material interaction were recently published in Physics Scripta. The first article authored by PhD student Victoria Winters on “Overview of the plasma surface interaction analysis in the limiter phase of W7-X” described results on the erosion and deposition on the limiters of the startup campaign at Wendelstein 7-X. The collaborative research with the MAx-Planck Institute in Greifswald, Germany and the Research Center Juelich, Germany has revealed the erosion and deposition zones on the limiters at W7-X. This was a first time analysis combining in-situ spectroscopic measurements taken during the plasma exposure in W7-X and post-mortem surface analysis in such a 3-D magnetic edge topology. This work was funded by the U.S. Department of Energy under grant DE-SC0014210 and DE-SC0013911 .

In the second paper, authored by post-doc Edward Hinson stationed at the U.S. national fusion facility DIII-D in San Diego, CA, USA on “Study of the impact of resonant magnetic perturbation fields on gross tungsten erosion using DiMES samples in DIII-D”, the erosion properties of a tungsten (W) test sample in the 3-D boundary induced by resonant magnetic perturbations was investigated for the first time in detail. 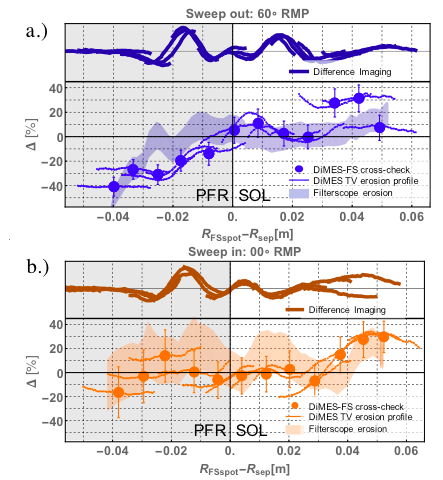 The paper describes the results of an experiment comparing gross tungsten erosion on samples exposed to OSP sweeps in L-mode with and without RMP. It was found that upon RMP application, lobes evident in divertor camera data and on Langmuir probes increased gross erosion in the RMP cases by no more than 30% above the level observed in unperturbed discharges. A large reduction in gross erosion (50%) was observed in the private flux region at the W sample for one specific toroidal phase of the RMP field. This work was funded by the U.S. Department of Energy under Early Career Award grant DE-SC0013911.