The ERO2.0 code is a fully parallelized 3D kinetic Monte Carlo code developed atForschungszentrum Juelich [1] to model plasma-wall interactions (PWI) and impurity transport in a full reactor sized volume. The capabilities included in this code over its predecessor allow the modeling of 3D effects on particle transport such as those encountered in resonant magnetic perturbation (RMP) scenarios. In addition, wall shaping can introduce non-axisymmetric effects on PWI processes, which can be considered when performing large sector/full volume simulations. As an initial step the code utilizes sputtering and reflection (i.e. SDTrimSP, molecular dynamics) databases to calculate the number of eroded and deposited particles that result from impact of the plasma background. The resulting fluxes are used to create test particles which are traced (either full orbit or guiding center approximation) with the inclusion of drifts, diffusion, and atomic processes (i.e. ionization, recombination, emission). The code is used to model PWI in many major devices all across the world such as ITER, W7-X, DEMO, EAST, WEST, FNSF and DIIID (Figure 1). This work was funded in part by the U.S. Department of Energy under grant DE-SC0020284 and DE-SC00013911. 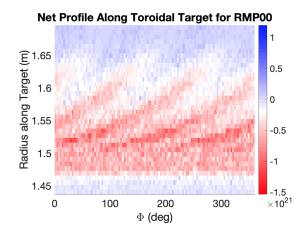 Figure 1. Sample erosion/deposition map for the DIIID lower divertor during an L-mode discharge for a 0° RMP phasing.

EMC3-EIRENE is a numerical code used to model the plasma boundary. It is a coupling between the plasma fluid code EMC3 and the neutral kinetics EIRENE code. EMC3 is a Monte Carlo code which solves the Braginskii equations in the plasma edge. In these equations, neutral source terms appear. They are modeled using the EIRENE code which is solving the Boltzmann equation. Local values for the plasma density, flow velocity, and temperature are determined by the solved set of equations. In contrast to other plasma edge codes (like SOLPS-ITER, EDGE2D-EIRENE…) EMC3 is a three-dimensional code allowing to study 3D effects. This makes it currently the leading code for plasma edge modeling in stellarators and allows to study 3D effects like resonant magnetic perturbations in tokamaks. 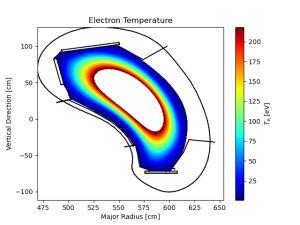