A paper was published in Nuclear Fusion  today by Prof. O. Schmitz demonstrating on two devices that resonant magnetic perturbation (RMP) fields can be used to enhance the exhaust of helium from fusion plasmas. 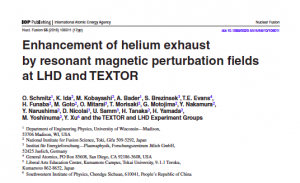 Sufficient helium exhaust is a mandate for fusion reactors as the helium produced by the fusion reaction of deuterium and tritium needs to be exhausted from the plasma to avoid that fuel (D and T) is replaced by helium which does not fuse under the condition of a man build fusion reactor. A small level of helium in the plasma mix can be tolerated but the effective confinement time of helium must not exceed the energy confinement time by more then some factors.

Experiments proposed and conducted by Prof. O. Schmitz in collaboration with the local experimental teams at the limiter tokamak TEXTOR in Juelich, Germany and at the Large Helical Device LHD in Toki, Japan featuring the closed helical divertor have shown in a concerted approach that RMP fields substantially reduce this effective helium confinement time in the system. It was seen that the application of RMP fields yields increased retention of the helium which is recycled at the material interface. As the pumping efficiency for helium is small, this is an important mechanism to avoid the helium penetrating the plasma core domain again where the fusion processes happen. The plasma core at LHD was decontaminated substantially by the application of RMP fields with a drop of the helium content from 70% to 20% in the ion root confinement regime which is prone to impurity accumulation. This demonstrates that RMP fields can be used effectively to aid impurity exhaust even in unfavorable impurity transport regimes in heliotron type stellarator devices.

A reduction of the global helium confinement of up to 50% at TEXTOR and up to 30% at LHD was shown. This work was supported by JSPS KAKENHI Grant Numbers 25420893, by start up funds of the Department of Engineering Physics and of the College of Engineering at the University of Wisconsin—Madison, USA and under grant DE-SC00013911 and DE-SC0006103 of the U.S. Department of Energy.