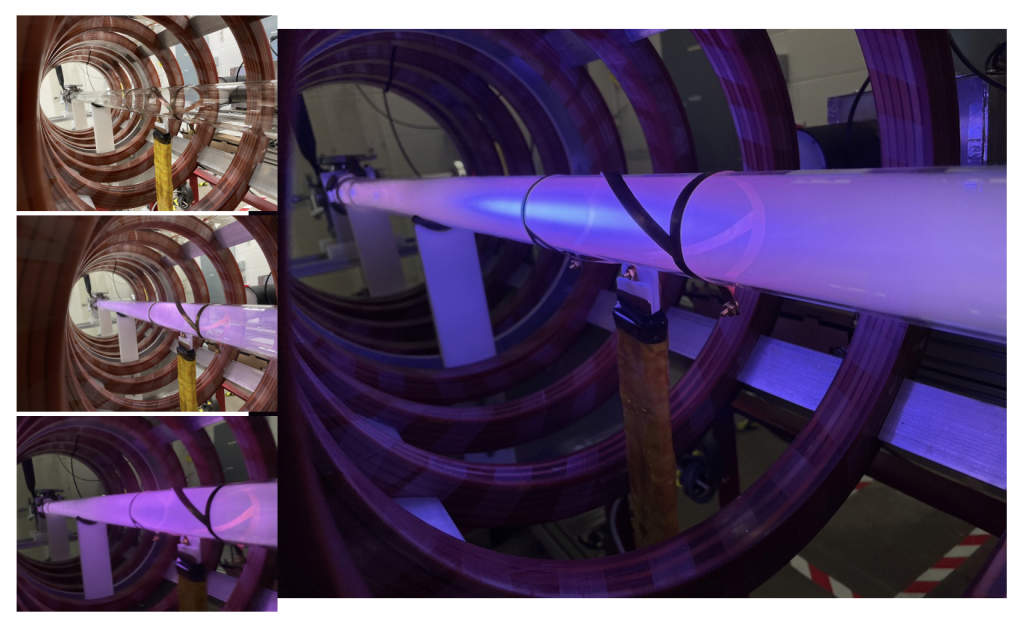 In the course of the last days, a one-year-long construction process has cumulated in the breakdown of a helicon plasma. This plasma state, driven by a specific radio-frequency wave that propagates in magnetized plasma, features a very good efficiency to generate ahigh degree of ionization in the plasma. This ionization can be detected by observing the transition of for instance an Argon plasma from a red-colored, diffusely glowing state to a plasma structure that features a pronounced plasma core with a predominant blue emission, the wavelength domain of singly ionized Argon ions (Ar-II). In the sequence of pictures below, this transition from an empty vessel to an inductively coupled Ar-I plasma at low power, higher power, and eventually a plasma with pronounced blue (Ar-II emission) core is shown.

Congratulations to the team that designed and constructed the device in the 3D-PSI group: Barret Elward for the mechanical, thermal and electrical work, Michael Zepp for initial work and exploration of a good vacuum vessel for such a 2m long helicon plasma and Marcel Granetzny for leading the design and implementation of the RF -system and for accomplishing the final commissioning and the generation of the helicon plasma. Great job – go Badgers!

The MAP device will contribute to explore the way to use such a helicon plasma as a plasma cell in a Particle Driven Wakefield Accelerator (PDWA) concept, pursued by the AWAKE project at CERN (https://home.cern/science/accelerators/awake). This project aims at demonstrating the feasibility of a PDWA approach for next-generation particle accelerators. The accelerating electric field strength that can be generated in this approach exceeds those possible with present-day technology by a factor of 50-100 and can hence make the length of these devices used in fundamental particle physics as well as medical applications orders of magnitude smaller. The plasma cell technology is a key element in this development, and the 3D-PSI group is involved in developments of the diagnostics, RF propagation and coupling optimization and in particular in the feasibility study of scaling the length of existing helicon cells to the required 100m level for a next-generation particle accelerator using this concept.

Funding for this work was provided by the National Science Foundation under grant  PHYS-1903316 and the College of Engineering at UW Madison as well as the Wisconsin Alumni Research Foundation. The setup is re-utilizing key components of the KIWI (Kiel Instrument for Wave Investigation) plasma device from the Christian-Albrechts University Kiel, which was generously donated to us.