Here are some exciting news about our helicon device MARIA which is used to explore stable access to laboratory scale high density plasmas. As always, “high” is relative, but we target on densities which are representative for possible next generation wake-field accelerators (high 10^20 per cubic meter) and also for divertor plasma conditions in fusion devices. A critical question for helicons is how this particular RF wave localized just below the lower-hybrid cut-off frequency is so effective ionizing a neutral gas and that above an empirical limit further fueling the dense plasma column seems very difficult as a depletion of the neutral population occurs.

Our endeavor to shed light into this question is funded by the National Science Foundation (NSF) under the CAREER award. The device is used also as a facility in the research on 3-D Plasma Wall Interactions funded by the Department of Energy under the Early Career Award program.

In the past year, the two graduate students Jonathan Green and Victoria Winters managed to establish a reliably working facility in which a stable helicon plasma is obtained regularly. This plasma was now characterized for the first time in detail  and it was shown that with just 750 W of RF power, a plasma of 2.3 eV electron temperature, 0.1 eV Ion Temperature and 1.2 x 10^18 per cubic meter plasma density was obtained for time scales of 20 minutes. This is an excellent basis for further developing the plasma to the density regime in which neutral depletion occurs by enhancing the RF power. Power supplies to go up to 15kW are available and are being prepared for implementation together with a second antenna. Also, the setup of a sophisticated LIF dye laser system is ongoing to characterize the ionization process by active laser spectroscopy. This system will be used in addition for direct validation of collisional radiative models developed for application in the island divertor at Wendelstein 7-X. in collaboration with Prof. Stuart Loch, Auburn University and Dr. Jorge Munoz-Burgos from the Johns-Hopkins University. 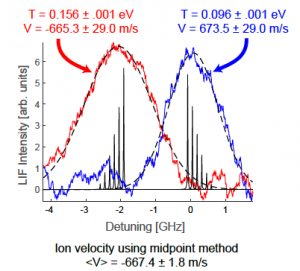 The existing LIF setup based on a  diode laser has been used to explore a new method to measure the ion velocity. The symmetry of the anomalous Zeemen effect is being used to avoid the detailed de-convulution of the measured LIF spectrum. The demonstration of this technique is being presented as a poster by Jonathan Green this week on the 19th International Conference on Atomics Processes in Plasmas, Paris, France.

This research activity is carried out in a close collaboration with Prof. Noah Hershkowitz, Emeritus Professor in our department,  Prof. Greg Severn, Chair of the Department of Physics at the University of San Diego and with Dr. Umair Siddiqui, Post-Doctoral researcher at the West Virginia University. Links to the MPEX team at the Oak Ridge National Laboratory (ORNL) and the group of T. Klinger/O. Grulke at IPP Greifswald operating larger scale, high power density facilities are being established.